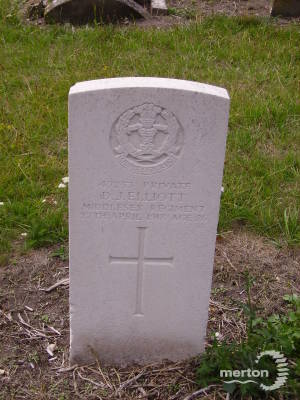 David was born in 1892 and baptised at the parish church of St. Peter and St. Paul, Mitcham. He was the second son of general dealer, David Elliott and his wife, Emma. The couple also had an older son, George and a younger child, James. Sadly, Emma Elliott was widowed whilst her sons were still children, so she began working as a laundress to support her young family. Originally based at an area known as Lubbs Alley in Mitcham, the Elliotts later moved to Fountain Road, a row of terraced houses off Church Road. They ultimately settled at 20, Smith’s Buildings, Commonside East – another row of Victorian terraced properties, fronted by a small convenience store. (These houses were demolished as part of slum clearance in 1936.)

By 1911 David was working as an agricultural carman, or waggon driver, and his younger brother James was a farm labourer.

With the outbreak of war, David enlisted at Wimbledon and became a private in the Middlesex Regiment. He was later transferred to the Labour Corps / Army Service Corps. David died at Clamp Hill, Harrow Weald on 27 April, 1918. The circumstances of his death are unknown and it is not clear whether he died as the result of wartime injury or ill health. He is buried at Mitcham Parish churchyard.