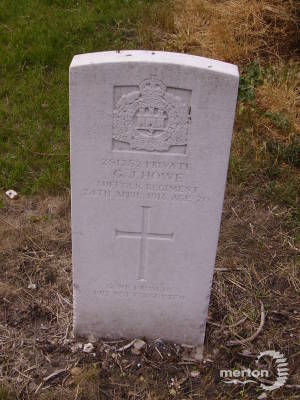 : Born in 1897 to Alfred Edward and Elizabeth Howe, George was baptised on the 7th of November at Mitcham Parish Church. His father worked as a car man, and later, as a labourer at a gasworks. George was the second oldest child, with at least six siblings, including older brother Alfred, who left school at 15 to work as a junior clerk, and younger siblings Ada, Frederick, William, Kate, and Rose. The family initially lived at Mayfield Cottage, but soon moved to a five room house at 5 Sibthorp Road, Mitcham. George worked as a newsboy when he was 13, whilst still attending school.
After enlisting, he was initially placed in the 1st Shropshire Regiment, but was transferred to the Suffolk Regiment, where he remained until sustaining mortal wounds in Flanders. He died at home, and was buried in Mitcham’s Church Road Burial Ground.