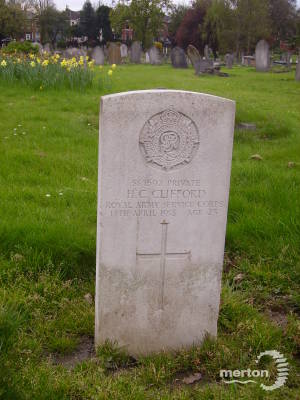 Harold Clarence Clifford was born to parents James & Honor (nee Russell). His parents had married at St. Giles Parish Church in Camberwell on 16th November 1869 and James was employed as a Railway Clerk. He and his wife Honor spent the first 25 years of marriage living in the Clapham and Wandsworh area’s and had at least nine children prior to Harold’s birth.

By the time Harold was born in 1895 the family had moved to the South Wimbledon area.

In the census of 1901 Harold aged 5 was living with his parents and six siblings at 20 Montague Road, South Wimbledon. His father James and brother Howard aged 24 were employed as Railway Clerks, whilst his two eldest sisters Maria aged 20, and Martha 16 worked as dressmakers. Other siblings were Grace aged 14, Arthur 13 and Hetty 11. Three older siblings James 30, Honor 29 and Dora 27 had all left home.

By 1911, Harold, his parents and three siblings were now residing at 102 Amity Grove, Wimbledon, a property of six rooms. Harold’s father James aged 64 was listed as a retired Railway Clerk. He and his wife Honor had been married for 41 Years and had 16 children of which 6 had died. Harold was still at school whilst sister’s Martha and Hetty worked as dressmakers and Arthur was listed as a ship’s steward.

Harold was aged 18 when war broke out. He enlisted in Battersea as a Private for the Army Service Corps 10th Division Regimental number SS/1692.

Officers and men of the ASC were the unsung heroes of the British Army. They performed prodigious feats of logistics supplying a vast army on many front with food, equipment and ammunition.

Harold died at home on 14th April 1918 aged 22. He is buried at Wimbledon Gap Cemetery.