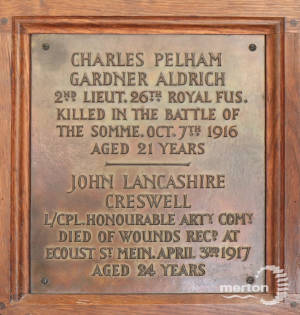 John Lancashire Creswell was born to parents Frank Creswell and Emily (nee Scholes). His father was born in Portugal and worked as a Merchant whilst his mother came from a wealthy family and was brought up at Crumpsall Hall near Manchester where her father a Cotton Spinning merchant employed over one hundred men in his business.

By 1891 Frank and Emily now had three children, Gordon, Thomas and Hector and were employing three servants and a nurse at their house in Wimbledon which they named “Crumpsall”. Frank was listed as a General Merchant.

John Lancashire Creswell their fourth son was born on 21st December 1892 and was baptised on 5th February 1893. Towards the end of 1893 his mother Emily, died. John’s father married again in 1899 and John’s new stepmother was Ethel Maud (nee Jerram).

The family remained living at “Crumpsall”, 17 Darlaston Road Wimbledon and by 1901 John now had a younger half-sister called Margaret aged 5 months. The family were still employing three servants and a nurse. Further children followed: Richard in 1902, Doris in 1903 and Kathleen in 1908. Shortly after the birth of Kathleen John’s stepmother Ethel died on 3rd November 1908. John would have been just coming up to his 16th birthday.

John was educated at Rokeby School in Kingston then at Lancing College. After leaving school he went into business with his father.

By 1911 the family were still living at 17 Darlaston Road, a house with twelve rooms. They employed two servants and a nurse and Ethel’s unmarried sister Harriette Jerram was also living with the family. John aged 18 was listed as working in his father’s office and records show he travelled to Portugal on several occasions.

On 4th June 1914 came the news of the death of John's brother Thomas who was aged 27. Thomas had enrolled in the Honourable Artillery Company in 1905 and was now a Flying Officer who had drowned in the execution of his duty while piloting a seaplane. He was buried in Haslar Royal Navy cemetery in Gosport.

When war broke out John was aged 21. Records show he returned to Liverpool via the Royal Mail Steam Packet ship called the Demerara on 16th December 1914.

He was prevented by defective eyesight from obtaining a Commission so joined the Honourable Artillery Company 2nd Battalion on 3rd January 1916. He served with the Expeditionary force in France and Flanders from 3rd October 1916 where he was involved in the fighting at Armentieres and on the Somme and Angre Rivers. He was promoted to Lance Corporal in January 1917.

John was wounded in action on 1st April 1917 on an attack on an outpost at Ecoust St. Mein near Croislle and died two days later on 3rd April 1917 aged 24.
He was buried at the Military Cemetery Colincamps in the Somme Region six miles from Albert in France. John and his brother Thomas are both remembered on a brass plaque at St. John’s Church in Wimbledon and John is also included in the UK, De Ruvigny’s Roll of Honour.

John and Thomas’s father Frank remained living in Darlaston Road right up to his death in 1931.