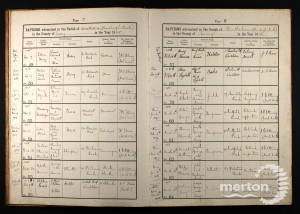 Thomas was born in Peckham on15 February 1896 but by the end of the following year the family had moved to Wimbledon.
His parents Joseph and Mary lived in an 8 roomed house at 90 Hartfield Road, Wimbledon and Thomas grew up alongside his older sisters Josephine Mary (b. 14 Dec 1888), Daisy Dimple (b. 1891), Peter (b. 21 Jan 1893) an Ernest Arthur (b. 4 Dec 1897). He was baptised in St Mark’s Church, Wimbledon on 4 March 1906 with Josephine, Peter and Ernest.
His father, a retired carpenter, was born in 1843 and by the 1911 census he was a widower living with his daughters and Thomas and Ernest who were still at school. Thomas attended Rutlish.

When Thomas was 16 he embarked on a major adventure, leaving Wimbledon for the Alberta region of Canada to become a Prospector. He sailed on the “Ascania” which was built at Wallsend by Swan, Hunter and Wigham Richardson and had two masts and two funnels and a tonnage of 9111. Her maiden voyage was on 23 May 1911 to Canada and she was wrecked on 13 June 1918 off Cape Ray but fortunately there was no loss of life.

Thomas enlisted in the 29th Battalion of the Canadian Infantry, British Columbian Regiment on 17 July 1915. He gave his sister Josephine, who was now living at 1 Marlborough Road, Wimbledon as his next of kin.

Thomas was 5ft 10½ins tall with a 37inch chest. He had brown hair, blue eyes and a fair complexion.

The 29th (Vancouver) Battalion, also known as “Tobin’s Tigers”, was raised in Vancouver in March of 1915 and had an initial strength of 1227 officers and men. Its first CO was Lieutenant-Colonel Henry Tobin, a veteran of the RCMP and the South African War. Arriving at the front in the autumn of 1915 it served with distinction from the trenches of the Kemmel Sector to the Final 100 Days campaign.

Thomas was initially reported “missing in action” and later “presumed dead” after an attack on 21 August 1917, north west of Lens. He is commemorated on the Vimy Memorial.