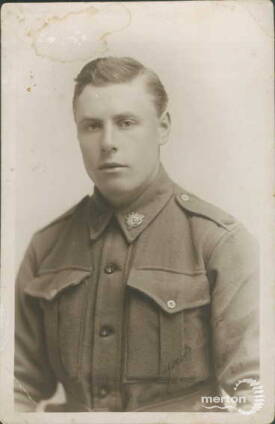 His father was Henry George Powell (b 1831), a gentleman of independent means from West Hackney. Henry’s second wife Annie bore him six children: Lilian (b. 1882); Florence (b. 1885); Leonard (b. 1887); Charles Henry (b. 1889); Edwin and Hilda Gertrude (b. 1894). Lilian and Florence were born in Kensington, however the family had moved to Wimbledon by the time Leonard was born and they lived at 13 Gap Road for many years.

Edwin attended Rutlish School between January 1908 and July 1909, where he was Vice-Captain of the cricket team.

After leaving school, Edwin became a clerk. The 1911 census showed that he was still living at Gap Road but was working for the Port of London Authority. His older brother, Charles emigrated to New Zealand, presumably in search of better prospects and in 1912 Edwin moved to Australia where he met and married Sylvia.

Edwin enlisted in the army in 1916, just a few months after his wedding. He joined the 51st Battalion of the Australian Infantry AIF, embarking for France when his young son was just 9 months old.

The Powell family suffered their first wartime loss on 13 May 1915 when Edwin's brother, Leonard, a Rifleman in the 3rd Battalion, King's Royal Rifle Corps, died from wounds received in Ypres.

Edwin died of gun shot wounds received at the Somme on 27 August 1918. His widow suffered a number of bereavements and four years after Edwin’s death, she apparently walked into the sea and drowned. Their son was brought up by an aunt.