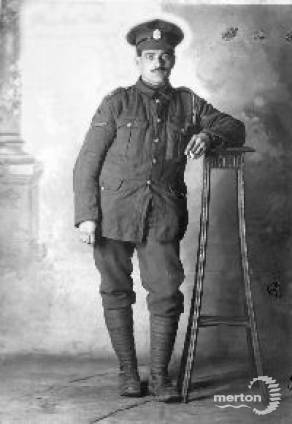 Born in Clerkenwell, Middlesex on 20 January 1884, Charles was the son of painter William Gibbs and his wife Eliza, who worked as a Charwoman, or cleaner. The couple also had an older son, William and a younger daughter, Annie.

It would appear that by March 1890 Eliza Gibbs had been widowed and was struggling to cope. She and her young children were admitted to the City Road Workhouse, administered by the Holborn Union for the residents of Clerkenwell. The workhouse also provided medical care for those in need and it is possible that Eliza was unwell. She was discharged three weeks later, but the children were sent to the Holborn Union Industrial School in Mitcham as Pauper Inmates. Located not far from what is now Bond Road, Mitcham, the school provided vocational training for boys in trades such as carpentry, tailoring and agriculture, plus household skills for girls to prepare them for employment in domestic service.

By 1901 seventeen year old Charles was employed as a Porter in a Tea-Grocers shop and was living at St Helena Place, Clerkenwell, with his mother and his youngest sister, Rosetta (also known as Rose).

It appears that Charles had enjoyed his time living in Mitcham – by 1911 he and his young wife were residing at 28 Pitcairn Road, Figges Marsh with their four year old son Charles Jnr. A second son, Ernest Frank, was born the following year.

Following the outbreak of war, Charles Snr volunteered for military service, enlisting as a private in the East Surrey Regiment on 31 May 1915. At the time he was described as a carpenter, 5 feet 3 inches tall and weighing 128 lbs. Stationed in Britain till November 1915, Charles was transferred to the 3rd Battalion, Border Regiment and later to the 1st Battalion. The men sailed from Devonport, Portsmouth on 24 November 1915, bound for the Dardanelles and Gallipoli where they fought the Turkish army.

On 11 March 1916, the Battalion was posted to France. They saw action at some of the major battles on the Western Front, including the Battle of the Somme (1 July – 18 November, 1916) and the Battles of the Scarpe (9 April -4 May 1917). Charles was promoted to Lance Corporal in September 1916 and a month later was awarded the Military Medal for gallant conduct during a battle fought on 30 September 1916.

Between April and May of 1917, the 1st Border Regiment took part in the Battle of Arras. British troops attacked German defences making big gains on the first day but this was followed by a lengthy stalemate, and the battle cost nearly 160,000 British lives. Charles was killed in action on 19 May 1917, aged 33. His remains were never found and he is commemorated on the Arras Memorial, France. His name also appears on the Mitcham War Memorial.

His widow, Annie, was awarded a war pension of 22 shillings and eleven pence per month to raise their two children. The family continued to live at 39 Pitcairn Road until the Second World War.