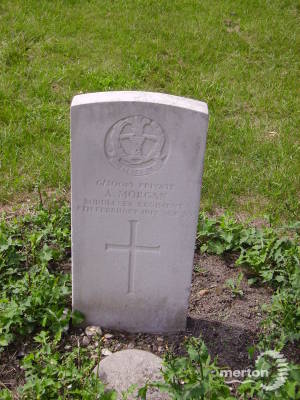 Born in Battersea in 1888, Albert was son of Eliza Morgan. His mother, Aunt Emily and Uncle William, were all employed in the laundry business. The family lived with Albert’s grandmother, a shopkeeper also named Eliza, at 54 Summerstown, Wandsworth. In 1900, the Anglo American Laundry opened nearby and many residents in Eliza’s neighbourhood were employed there. By 1901, 13 year old Albert had a young sister, Violet aged 10. Both his mother and grandmother were now employed as laundry ironers, an occupation that required hard physical labour and led many women to develop serious back problems.

The 1911 census shows the family living at 3 Ravensbury Villas on Morden Road, Mitcham. Young Violet had now also joined the laundry trade and Albert was working as a Packer, probably at Hancock and Corfield Ltd. He was a trusted employee of the firm for ten years, prior to enlisting in the army. Originally metal printers, making items such as waiter trays for the drinks industry, Hancock and Corfield started munitions work during the war. The firm produced khaki covered water bottles for the British Forces.

In June 1914, Albert was a witness to the marriage of his sister Violet and George Pavitt at Mitcham Parish Church. The marriage register lists Violet’s father as Daniel Thomas Morgan, a Boiler Maker. He may also have been Albert’s father but it is hard to be definitive about this.

At the outbreak of war, the Morgan family was living in Church Place, Church Road, Mitcham. Albert enlisted locally and joined the 29th Battalion, Middlesex Regiment as a Private in May 1916. This was a works battalion which spent the war stationed in Britain. In 1917 he was home on week-end leave, when he became ill with double pneumonia. He was transferred to the Military Hospital, in Western Road, Mitcham. This building had formerly been the Holborn Union Workhouse, but had been requisitioned by the War Office in 1916 for use as a military hospital. Unfortunately, on 8 February 1917, Albert became the first soldier to die there.

Albert was buried with full military honours and lies in the cemetery at Mitcham Parish Church. His mother, grandmother, sister and brother-in-law led the mourners. Such was Albert’s popularity, that his funeral was attended by no fewer than 200 men from his former regiment, together with patients from the Military Hospital.