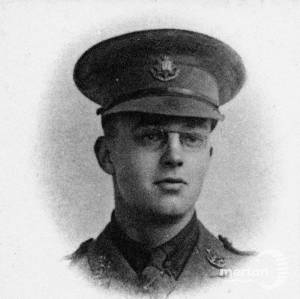 Born on 1 August 1897, Arthur was the son of Henry and Florence Statham. The couple also had three other sons and two daughters. Henry Statham was a Fellow of the Royal Institute of British Architects and an Honorary member of the Royal Philharmonic Society. At the time of Arthur’s birth, his family was living in Gower Street, London but they later moved to 1 Camp View, Wimbledon Common, followed by 6, Lancaster Road, Wimbledon.

Arthur was educated at Wykeham Hall, Lee on Solent, before studying at Fettes College, Edinburgh. He left school in July 1915 and was gazetted as 2nd Lieutenant in the East Surrey regiment. He saw action in France and Flanders from September 1916 and was then attached to the 9th Rifle Brigade, with special duties as a signalling lieutenant.

Arthur died during fighting near Monchy on 3 May 1917. He was reportedly shot in the back by a sniper whilst standing to address his men. His body was never found, but is presumed to have been buried by the Germans when they took temporary control of the ground where he lay.

Arthur was clearly held in high regard. Following his death, his Colonel wrote “He was signalling officer of the battalion, work in which he showed the utmost keenness. He was given a special job to do in the operations of April 9th, and I found him at the objective one and a half hours after our attack, coolly working away, which work was later commended by the brigade signalling officer”.

The Captain of Arthur’s unit also wrote to the Statham family to say “We all regret his loss to us, as he was a tremendously cheery companion and a brave officer”.

Arthur’s brother, Noel, also died in the war. He was a lieutenant in the East Surrey territorials and died fighting Turkish forces near the Tigris (now part of Iraq).

Arthur is commemorated on the Arras memorial in Northern France and his name also appears on a monumental inscription at Wimbledon Parish Church.