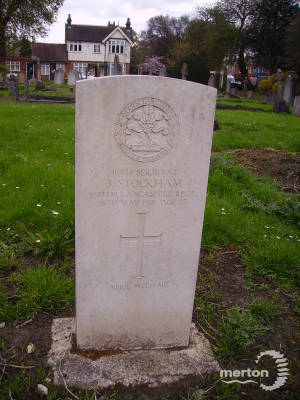 Born in Wimbledon on 7 May 1895, William was the son of Frank and Susan Stockham. The family seems to have moved house several times during William’s lifetime but was largely based in and around Palmerston Road, Wimbledon.

In 1911, fifteen year old William was an errand boy. When the war started, the Stockham family was living at 4, Cross Road, Wimbledon and William was working as a fishmonger’s assistant. He enlisted as a Private in the 7th Battalion, South Lancashire Regiment in May 1915.

The 7th Battalion was part of Kitchener’s new army, often referred to as K2. It was assigned to the 19th ( Western ) division and after training on Salisbury plain, headed to France in September 1915.

William and his unit are thought to have fought in the Battle of the Somme ( 1 July – 18 November 1916. ) During this period he was promoted to the rank of Sergeant. He died at Mile End Hospital, London on 16 May 1918, presumably from wounds sustained in battle.

The Stockhams were living in Palmerston Road, Wimbledon at the time of William’s death.
He was buried at Gap Road Cemetery and the words “Abide with Me” were added to his gravestone at the family’s request.