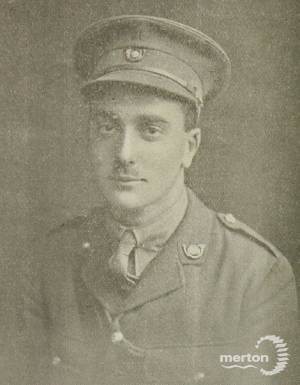 Born in Mitcham, Surrey on 23 August 1895, Henry Stewart Jackson was the youngest son of Mitcham clergyman Reverend Sydney Jackson and his wife, Helen. His elder brother Arthur Gordon was born in 1890. For many years Arthur’s father was employed as the chaplain at the Holborn Union Workhouse in Mitcham and the Holborn Industrial Schools. The latter was a vast building that provided accommodation and training for over 1000 pauper children. During World War One it was converted into a military hospital.

During the early 1890s the family were living at Prospect House, a large property on the eastern edge of Fair Green, Mitcham, together with their maternal grandmother and a domestic servant. By 1905 the family had moved to White Heather on Graham Road, Mitcham.

Henry was educated at St John’s School, Leatherhead and Whitgift Grammar School in Croydon between 1908 and 1911. He entered the Medical College of the London Hospital in October 1913 as a medical student. Before joining as a combatant, he served for many months as a Dresser with the British Red Cross, at the Anglo-Belgian Hospital, and later at the Anglo-American Hospital at Wimereux, France before taking up a commission in the Kings Own Yorkshire Light Infantry (KOYLI) as a Lieutenant. He was promoted to 2nd Lieutenant in April 1916. In June 1916, his regiment left for the front to take part in the ‘big push’.

Tragically, Henry was killed in action on the first day of the Battle of the Somme, on 1 July 1916, during the attack across ‘No Man’s Land’. He was badly wounded in the neck and fell into a shell hole near La Boiselle Church. As he has no known grave, he is commemorated on the Thiepval Memorial to the Missing of the Somme, in France, and locally at St. Mark’s Church, Mitcham where he was a Parishioner.

His elder brother Arthur Gordon, was killed in the Mesopotamian campaign, on the 25 February 1917, and was awarded a posthumous Distinguished Conduct Order.