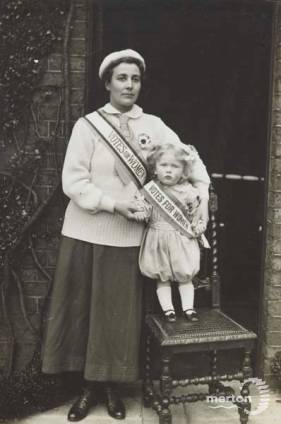 Rose Lamartine Yates was a prominent suffragette who lived at Dorset Hall in Merton from 1906 to 1935. She was born in Lambeth in 1875, the youngest of three children. Her father, Marie Elphage, a teacher of foreign languages, and mother, Marie Pauline Janau were born in France and became naturalised British subjects. Rose was educated at Royal Holloway College and the University of Oxford. In 1900 she married Thomas Lamartine Yates, a solicitor, and their only son, Paul Lamartine Yates was born in 1908.

Rose became involved in the women’s suffrage campaign in 1909, and was once arrested while on a deputation to the House of Commons and sentenced to one month’s imprisonment in Holloway Jail. At her trial, she defended her actions stating “every woman must have the courage of her convictions, and not slink back when she has taken her first step.”

Rose and Tom were keen members of the Cyclists’ Touring Club which had nearly 40,000 members. Rose won a seat on the CTC’s council for the Wimbledon district, and was notably the first woman to be elected. After the war broke out, Rose resigned her seat, and later in 1933, she presented the Club Museum with bicycles she and Tom had ridden.

By 1910, Rose was honorary secretary of the Wimbledon’s Social and Political Union (WSPU) which became one of the most prosperous branches in the organisation under her leadership. She addressed meetings nationally, notably delivering a speech at the 1910 demonstration in Hyde Park. She later broke away from the main body of the WSPU, forming another branch. She disagreed with Emmeline Pankhurst’s decision to suspend militant activity during the War, as she saw no reason for the campaigning to stop.

At the beginning of the First World War, Rose organised a soup kitchen in Wimbledon for the poor, which served hot meals at a low price. Her house, Dorset Hall became a refuge for suffragettes who convalesced there after periods of imprisonment. She was a member of the Royal Horticultural Society, and for the cause, planted a section of her garden in WSPU colours.

In the general election of 1918, in which for the first time limited female suffrage was granted, Rose was adopted as Labour candidate for the Wimbledon constituency, but she withdrew shortly before polling. After the War in 1919, Rose was elected to the London County Council, where she served for three years, championing equal pay, increased public housing and the provision of nursery education. She was also instrumental in incorporating Britain's first cycle lane in St. Helier Avenue, Morden.

After suffering with colon cancer, Rose died in 1954 at her home in Wandsworth at the age of 79. Her husband Tom died in 1929. After a successful career in agricultural economics, their son Paul died in 2009 at the age of 101.