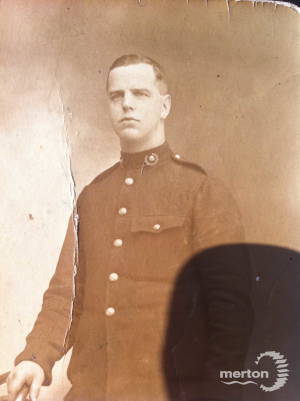 Albert was born in Merton in 1885. His father, Henry, was a railway worker and his mother was Martha. Henry and Martha already had a son Thomas and a daughter Rose when Albert was born and his younger sister Ada followed in 1888. As a child, Albert lived on High Path, Merton.

He married Florence Catherine Hall on 25 September 1909 at Christ Church Mitcham. They had a son Edward Sidney in April 1910 but sadly he died in August 1911. They went on to have two daughters, Margaret Emily born 31 October 1912 and Catherine Alma born 14 July 1918. At the time of the 1911 census, Albert was a baker’s assistant and he and his family were living at 22 Phipps Terrace, Church Road, Mitcham.

HMS Patuca mostly sailed in the North Atlantic but the last records in the Ship’s Log show her to be Freetown, Sierra Leone in May 1918 where it rained heavily and a sun hat was lost overboard. She was apparently then decommissioned as there are no records of damage.

Albert returned home but was not discharged and he “died of disease” in Grove Hospital, Tooting, on 21 November 1918 just one week before his wife also died. His address was given as Dane Cottages, Dane Road Mitcham and he is buried in Mitcham Road Cemetery Plot Z505.