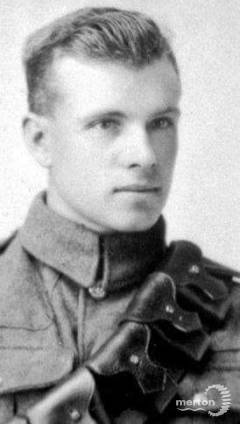 Born in Derbyshire in 1895, Archie Mountfort Wood was the eldest child of Harry and Florence Wood. In 1901 the family, including Archie’s younger siblings, Harry Jnr aged 3 and Doris aged 2 months were living at 21 South Street, Draycott, Derbyshire. Harry Mountfort Snr. was a Surgical Instrument Maker, and appears to have run his own business, as the census describes him as being an Employer. The household also included Mary Hall, a 58 year old widow who was described as a Monthly Sick Nurse. These nurses were generally older women who looked after a mother and her baby during the postnatal period, and usually lived in for month or so. As Dora was aged two months at the time of the Census, it is possible that mother and baby needed extra care.

By 1911, the family had moved to 3 Stanley Road, Morden - a substantial five roomed house. Fifteen year old Archie had now joined his father’s business, as his occupation was recorded as a Surgeon’s Instrument Maker. The family had now grown to include Irene May, and Flora Mountfort. The name of Mountfort appears to have a special significance to the family as Archie’s grandfather also had Mountfort as his second name. Sadly, the census also records that two of Florence’s children had died.

Archie was conscripted on 10 December 1916, at the Tooting Recruitment Office. He was aged 20 years, and was described as, 5ft 7in in height and weighing 141 pounds. He was recorded as being an apprentice, probably at his father’s business, and the address given was now 6 Stanley Road, a few doors away from the family’s previous address at No. 3. He joined the Royal Garrison Artillery as a Gunner with the 116th Siege Battery. The RGA were usually equipped with larger weapons than the RFA (Royal Field Artillery), such as Howitzers and 60 pounder heavy field guns. Some of the guns were so large that they could only be deployed on railway tracks. The RGA was often supported by the Royal Flying Corps (RFC) who had devised a system where pilots could use wireless telegraphy to help the artillery hit specific targets.

Archie married Ellen (Nell) Levins at Kingston in August 1917. Nell was born in Ireland and the 1911 Census shows Nell living with her widowed mother Minnie and brother, Arthur in Thurles Town, Tipperary. Nell and Minnie were working as Launderesses , while Arthur was a Labourer. At some point, the family moved to England where Nell met Archie.

During the German Spring Offensives (21 March - July 1918), a number of men from the 116th Siege Battery were taken as prisoners of war. Archie was captured during the Third Battle of the Aisne, at Pontavert near Craonne, France on 27 May 1918. After being treated at a German Military Isolation Hospital, he was transferred to Quedlinburg POW Camp in Saxony, Germany.

Quedlinburg was a ‘Mannschaftslager ‘ – an ordinary soldier's camp. It was a basic camp made up of wooden barracks which kept around 250 prisoners. Furniture in the barracks were minimal, containing a table, chairs or benches, a stove and sawdust beds stacked two high. The majority of prisoners were French and Russian. Men were paid for their labour with the camp’s own currency, which they could use to buy additional food from the Kantine (Cafeteria). The camp had its own bakery and its own orchestra.

Towards the end of the War, food was scarce and the British prisoners relied on Red Cross parcels to survive. The Russian prisoners fared the worst, as due to the turmoil in Russia at that time, they did not receive any parcels. By the end of the war there were around 18,000 prisoners, 7% of whom were British. Around 700 prisoners died in the camp, including 101 British service men. Sadly Archie was one of these men. The Prisoner of War Agency, a department of the International Committee of the Red Cross (ICRC) kept files on prisoners, taken from information supplied by German authorities. The entry for Archie, states that he “died as a result of general weakness” on 10 October 1918, just one month before the end of the War. He was aged just 23. He was buried at the Quedlinburg Camp’s own Cemetery. In June 1918, the prisoners erected a monument which they designed and paid for, to honour their fellow prisoners who had died not in combat but in prison. The monument still stands in Quedlinburg. After the War had ended, the British graves were re-interred at Niederzwehren Cemetery, Kassel, in Germany. Archie’s headstone reads “Peace, Perfect Peace”. He is also commemorated at Christ Church, Colliers Wood.

Electoral records show that Archie’s widow Nell lived with her mother Minnie at 11 Miller Road, Colliers Wood from 1918 to at least 1939 when records end. Her brother also lived at that address for some time. He too was in the Army, but fortunately survived the war. Archie’s sister Flora married Alfred Levett in 1935 while she was still living at the family home at 6 Stanley Road. Harry Snr. died in Surrey in 1952 aged 81.