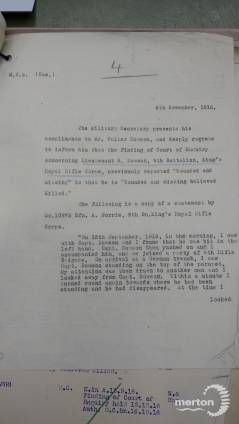 This is the copy of the letter sent to Walter Dowson informing him that his son had likely been killed. Humphrey Dowson had already been reported missing after disappearing while leading men along a German trench nearly two months earlier; by this time, it had been established that he wasn't being held as a prisoner of war, so he was officially listed as "Wounded and Missing, Believed Killed." See also: Service Record - Humphrey Dowson Part 2.