Suffragettes relaxing in the garden of Dorset Hall 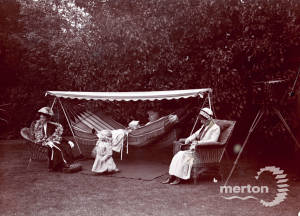 This photograph shows suffragettes resting in the garden of Dorset Hall, which was the home of Rose Lamartine Yates. Rose's only son Paul is seen playing on a mat.

Edith Marian Begbie (left), and Mrs Gertrude Wilkinson (centre) had been in jail for smashing windows, where they had opted to hunger strike. By the time they were released they were both very frail. Florence Mcfarlane known as 'Dundee's Hungerstriker' is on the right. Dorset Hall was often used by suffragettes to convalesce after periods of imprisonment.