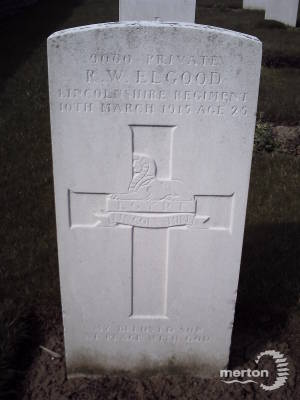 Robert was born in Battersea in about 1890, to William and Emily Elgood, and was baptised on 19 June, 1890, at St. Stephen’s Church. He was their second child, although his older brother James died at the age of only 2, shortly after the 1891 census was taken. He had eleven younger siblings, including Archibald and Alfred, who were also killed during WWI (see Archibald Frederick Elgood and Alfred Charles Elgood for more information).

In 1891, he and his family were still living in Battersea, where they shared a house at 10 Wye Street with the Mitchener family. They would later move to 97 Palestine Grove in Mitcham, and then 7 Briscoe Road in Colliers Wood. Robert’s father worked as a painter, bricklayer, and house decorator, and Robert initially appears to have followed in his footsteps by becoming a painter; however, in October 1910, at the age of 20, he instead opted for a career in the military, and enlisted in the 2nd Battalion of the Lincolnshire Regiment.

At the time of enlistment, Robert was recorded as 5’7”, 128 lbs, with brown eyes and hair, and a “fresh” complexion. In December 1910, only a couple of months after enlisting, Robert appears to have injured himself in the gym, leading to synovitis, for which he was hospitalised in Lincoln. He was later transferred to the Military Hospital in York, where he remained for 210 days, and is recorded as a patient there at the time of the 1911 census. He left hospital in August 1911, and must have adequately recovered by October, as he married Mabel Ethel Williamson in Croydon on 16 October, 1911, and their daughter Nellie May was born on 7 June, 1912.

He was sent to Gibraltar in March 1913, where he remained until January 1914, when he was transferred to Bermuda. A few months after war broke out, he was sent back to Britain, where he spent two weeks at the end of October, before shipping out with the British Expeditionary Force on 5 November 1914. He was initially reported wounded and missing in action on 10 March, 1915, and later declared dead. He is one of 60 British troops buried at the Neuve-Chapelle Farm Cemetery in Pas de Calais, France, and is also commemorated on the Mitcham War Memorial.