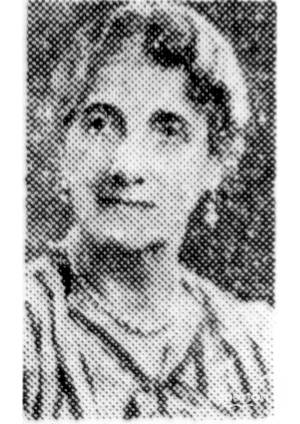 Hope Elizabeth Hope-Clarke was the founder of the Silver Thimble Fund. While sewing garments for soldiers on the front line, Miss Hope-Clarke noticed that her thimble was damaged. She had the idea that unwanted silver thimbles and other trinkets could be collected for the war effort. The Fund’s aim was to raise £400 - enough for at least one ambulance. An appeal was made in the Times newspaper in July 1915, and this target was reached within the first month. Interest in the Fund grew, and by the end of the Great War, enough money had been collected to finance fifteen ambulances, five motor launches and other vehicles. Money was also raised for beds in war hospitals such as the Copse Hill Hospital in Wimbledon, and the Star and Garter Home for Disabled Soldiers.

Miss Hope-Clarke was born in Calcutta, India. In 1881 Hope’s family, headed by her mother Katherine, was living in Oxford Gardens, Kensington. It was a large family, with elder siblings Alfred, Katie (Catherine) and Louisa Annie, and the younger children, Robert, Charles and Evelyn. Their cousin George Clarke was also living at the family home. Hope’s mother, brothers, and sisters were also born in India. By 1891, the family were living in Bolingbroke Road, Fulham – elder brother Alfred having left home.

In 1911, Hope Elizabeth was living at 2 Crescent Road, Wimbledon with her sister Louisa Annie. Both ladies were single, and were described as having ‘Private Means’. It was at this residence that the Silver Thimble Fund was started, and it became the Fund’s headquarters for the duration of the War. Louisa Annie and Lady Maud Wilbraham helped with the organisation of the Fund. The Fund became a national cause, and grew into an international operation with at least 160 collecting centres, including some in New Zealand, Canada and even China. Queen Alexandra, mother of King George V, became the fund’s patron.

In the early 1920s, Miss Hope-Clarke moved to the United States, and lived in New Orleans, for several years. She befriended Martha Gilmore Robinson (1888-1981). Later, during World War II, Martha Gilmore Robinson was responsible for creating the Silver Thimble Fund of America, serving to give relief to wounded British and American soldiers. This Fund was also an enormous success, supplying mobile canteens, flying ambulances and other much needed equipment as well as money for hospitals. The British headquarters for the Fund was at a High Street shop in Wimbledon Common.

The total sum collected over the two world wars amounted to over £232,000. Miss Hope-Clarke received numerous honours in recognition of her contribution to the War work. In November 1920 she received an O.B.E. In 1946 the Air Ministry presented Miss Hope-Clarke with three plaques in recognition of the various ambulances, sea rescue launches and other equipment the fund helped to supply and she also received a Service Medal for 1,000 hours of nursing in London Hospitals. She received a C.B.E (Commander of the Most Excellent Order of the British Empire) in the 1949 New Year’s Honours List. A booklet outlining the history of the Fund was given to the Queen in 1949, and Miss Hope-Clarke received a reply from the Queen in appreciation of her hard work.

Miss Hope-Clarke’s sister, Louisa Annie, died in The Wimbledon Hospital in 1944. Hope Elizabeth died after a long illness at the age of eighty, on 19 July 1950. Her death was reported in the Times and the Wimbledon Borough News.