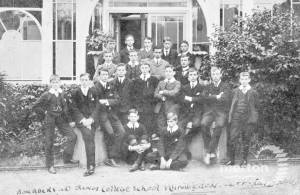 When King's College School moved to Wimbledon in 1897, there was a need for boarding houses for the pupils. These were initially managed by two of the masters, Speed and Brooksmith; however, after Brooksmith suffered a mental collapse and attempted to commit suicide with a starter's pistol, the Science Master, Mr. Carrodus, was given charge of his boarding house. From 1913, Carrodus instead leased a nearby building he owned, Glencairn House, to the school, and it became the sole boarding house for the next 35 years.