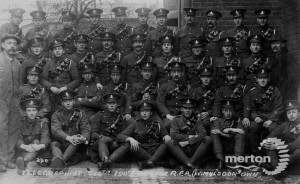 Wimbledon’s Own was one of the last of the “Pals” battalions to be formed during the First World War i.e. friends, workmates and people from the same town, who joined up on the understanding that they would remain together in one unit. Sadly this meant that many of them also died together on the battlefields of Ypres and the Somme.

The Telegraphist Section were members of the 190th Brigade of the Royal Field Artillery and would have trained and camped on Wimbledon Common.