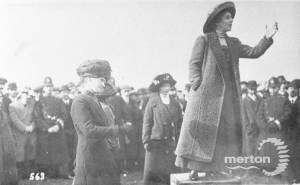 Rose was Chairwomen of the Wimbledon branch of the Women's Social and Political Union during the early twentieth century. She and her fellow suffragettes regularly held meetings near the flagstaff on Wimbledon Common as part of their campaign to secure votes for women. Spectators were not always sympathetic, as shown by the police presence.