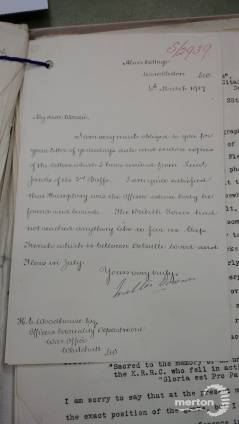 This is the letter Walter Dowson wrote to H. E. Woodhouse, head of the Officer's Casualty Department, regarding the attempts to identify his son's body made by Second Lieutenant Ivan A. Jacobs. Walter declares himself satisfied that the body 2nd Lieutenant Jacobs buried was indeed his son, Humphrey Dowson. For more information, see the letters from Ivan A. Jacobs to Walter Dowson.