Letter - From Walter Dowson to the Secretary at the War Office 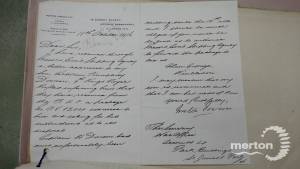 This letter was written by Walter Dowson, to the War Office, after his son Humphrey had been declared missing, but before he had been officially declared dead. At this stage, Walter was only asking to be authorised to receive a package from the British Expeditionary Force on his son's behalf.